Happy Sunday, everyone–and happy Greek Easter to those of you who celebrate! As planned, I whipped up some of my vegan avgolemono last night, and I’m already eager for leftovers. Steven, who was new to the world of this lemony soup, loved it, which made happy.

And now I’m being made happy by the following recipe inspiration–so much talent and beauty int his week’s bunch! 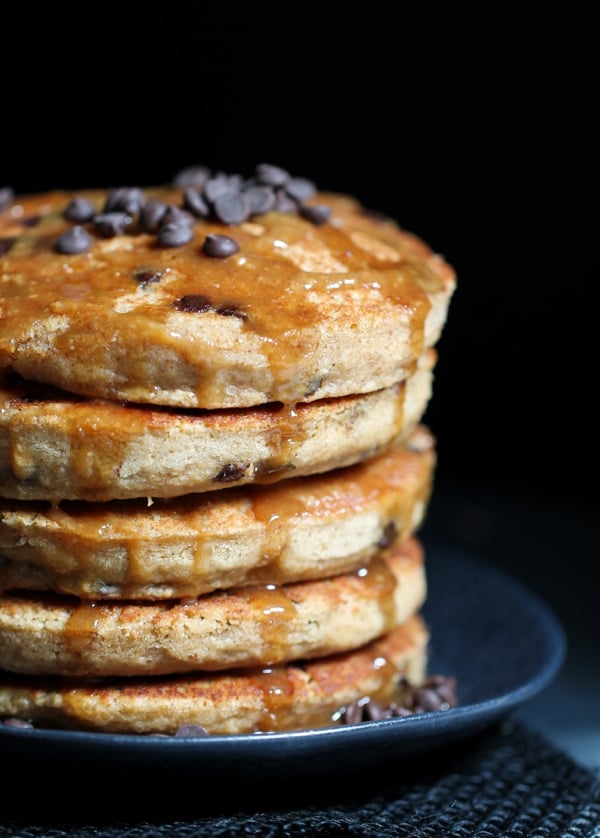 Let’s start with something sweet. If you’re stumped on what to make for a Sunday breakfast today, I’d say you should look no further than these decadent, fluffy vegan and gluten free peanut butter chocolate chip pancakes from The Vegan 8. 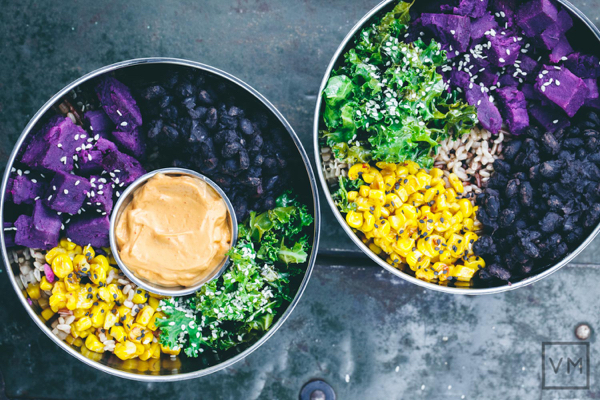 I’m a sucker for a great condiment, and this week, Rika’s gochujang mayo caught my attention over at Vegan Miam. Not to mention her super colorful bowls, pictured above! 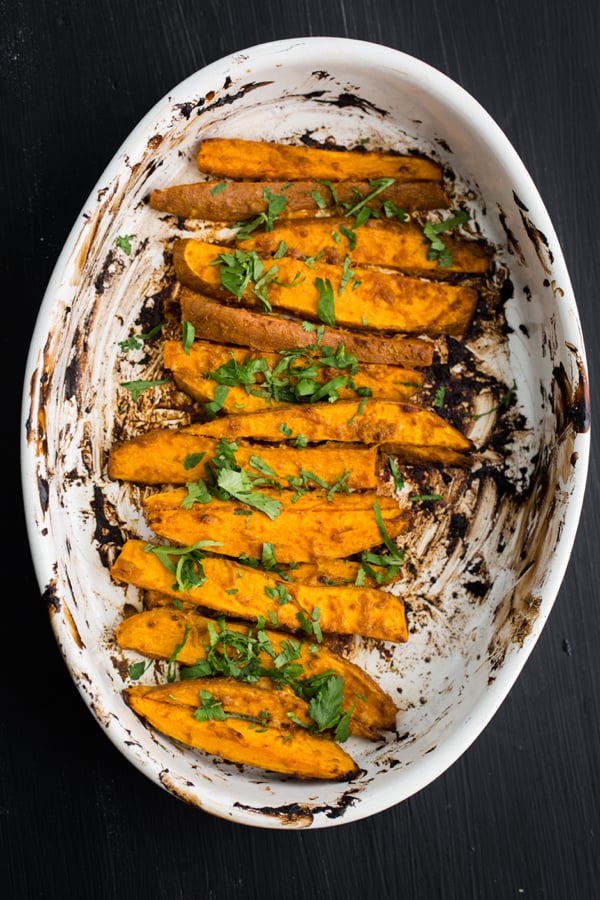 There are not too many things I would like to eat more than Erin’s tandoori sweet potatoes. They are beautiful and flavorful and have I mentioned that I’d really, really like to eat them? 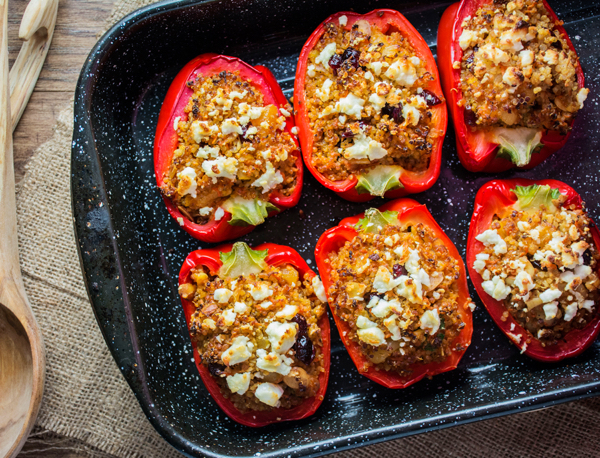 These Moroccan quinoa stuffed peppers from Port and Fin are calling to me; I love all of the spices and flavorings, and the finished dish is so vibrant! Just use cashew cheese in place of the suggested goat cheese garnish to make ’em vegan. 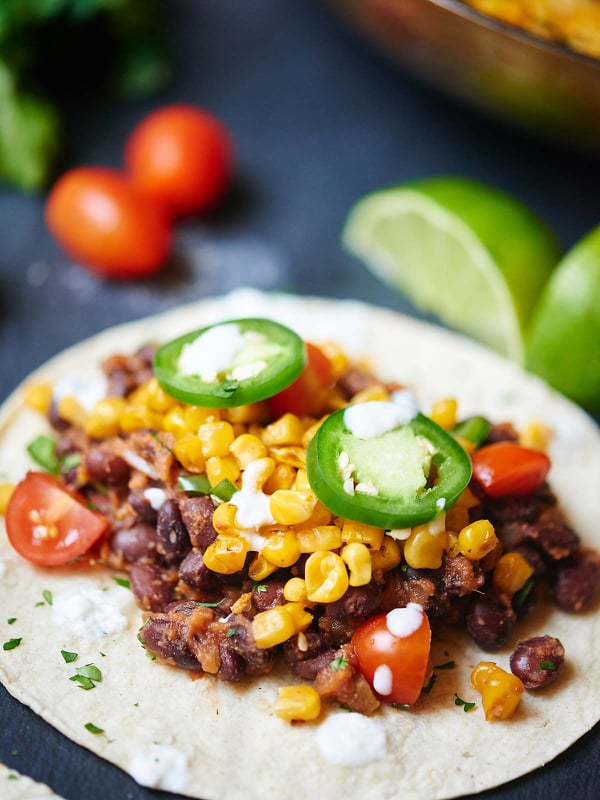 Finally, some super delicious and super easy vegan black bean and corn tacos from Show Me the Yummy. Perfect for a quick weeknight supper!

1. I think that awe is a pretty wonderful emotion, and I’m glad to learn that–at least according to one new study–it’s also pretty good for you. Article via The New York Times.

2. An impassioned, comprehensive, galvanizing article about continuing inequities in health care around the world from the ever-inspiring Paul Farmer. I read Mountains Beyond Mountains right before I started my post-bacc, and the book had a big impact on me (as I know it does on many pre-meds). I’m so glad that Farmer continues his tireless work for patients around the globe, both as a physician and an activist.

3. A federal panel that helps set federal dietary guidelines is recommending Americans eat less meat. The Dietary Guidelines Advisory Committee, a federally appointed panel of nutritionists created in 1983, decided for the first time this year to consider the environment and sustainability in its guidelines. The panel concluded that a diet lower in animal foods is not only healthier, but better for the planet.

Their report, which was created with the input and assistance of two domestic sustainability experts, says that “the average U.S. diet has a larger environmental impact in terms of increased greenhouse gas emissions, land use, water use and energy use than the healthy dietary pattern it suggests — one that’s rich in vegetables, fruit, whole grains, seafood, legumes and nuts; moderate in low- and non-fat dairy products and alcohol; and lower in red and processed meat, sugar-sweetened foods and beverages, and refined grains.”

The committee’s report says people should eat less red and processed meat because it contains saturated fats, which when over-consumed can lead to cardiovascular disease, and instead recommends Americans eat more vegetables and nuts. Both the United States Department of Health and Humane Services (HHS) and the USDA will be reviewing and responding to the report later this year.

4. Awesome coverage of the dairy-free cheese trend on NPR. So glad to see so many great vegan brands mentioned!

5. Finally, a cool article, via Quartz, about a new bean hybrid that can withstand heat–and possibly serve as a solution for those in developing countries who rely upon legumes as staple crops, but fear droughts and famines as global warming continues.

On that note, I wish you all a lovely Sunday. Excited to share more food and musings in the coming week.

Happy Mother’s Day, friends! If you’re celebrating a special caretaker in your life, then I wish you a lovely time. I came to NYC for the night so that I could take my Mama out to dinner, and I’ll be headed back to DC in the morning. It was a weekend of summery weather and fun in the District, thanks mostly to the annual Sweetlife festival, an all day music+food event in Maryland hosted by the same wonderful people who created SweetGreen salad….

The first time self-soothing was explained to me, it was by a friend who had her hands full taking care of a new baby. Self-soothing, she said, is when a baby develops the capacity to calm his or herself down. It’s seen as being key to uninterrupted nights of sleep for parents, since it allows babies to get back to rest if they should happen to wake up during the night. A little while later, when I was exploring resources on coping with…