Vegan buttermilk is the trick to making perfect vegan muffins, cakes, pancakes, cornbread, biscuits, and other quick breads. Learn how to make it with this simple recipe!

I love any and all of the baked goods that qualify as quick breads.

These include muffins, scones, cornbread, waffles and pancakes, banana bread and zucchini bread, many cakes, brownies, cookies, and more.

All of these tasty breads use chemical leavening. They rise because of the chemical reactions that happen when a leavening agent—usually baking powder, baking soda, or a combination of both—is added to batter.

Acids play a key role in allowing leavening agents to do their job in baked goods. This is why buttermilk is such a useful ingredient in baked goods that include baking powder or baking soda.

I can’t tell you how many times I’ve gotten an email or a DM asking me whether I have a recipe or an idea for vegan buttermilk. Fortunately, I do, and it couldn’t be easier.

I was maybe eight or nine, and I was at my grandmother’s home. I saw what I thought was a quart of milk in the fridge.

I opened it, helped myself to a glass, took a big gulp, and promptly found myself spitting it out into the sink.

Of course it seemed to me that the milk was spoiled. It was thick, a little lumpy, and quite sour.

In fact, this was a quart of buttermilk. I was bewildered that anyone would voluntarily buy such a product at the store.

My grandmother explained that buttermilk was a good ingredient for pancakes and for baking. Some people, she told me, enjoyed drinking it plain.

The latter bit blew my mind. Even then, I was fascinated by baking, and I remember being curious about this mysterious liquid and its role in making homemade treats. Little did I know how much I’d come to rely on a vegan version one day.

Buttermilk is the by-product of making butter. When you whip or churn cream enough, you end up with butter, which consists of the fat and proteins from the cream.

You also end up with a liquid. It contains water, milk proteins, sugar in the form of lactose, and a little fat. This liquid can become buttermilk.

In the past, when people regularly churned butter at home, they would apparently leave the leftover liquid out at room temperature overnight. It would ferment, thicken, and turn into buttermilk.

How to make vegan buttermilk

Fortunately, the process of making vegan buttermilk at home is much less complex than either the old-fashioned or the commercial means of making regular buttermilk!

That’s it, really and truly. This “recipe” is not so much a recipe as a method and a ratio: one tablespoon acid for every cup of vegan milk.

After you add the acid to the non-dairy milk, you’ll allow the mixture to sit for at least five minutes. In this time, it curdles and thickens slightly.

At this point, the milk is ready for adding to baked goods. You can also store it for up to three days in an airtight container in the fridge.

What type of non-dairy milk is best for vegan buttermilk?

Over the years I’ve made homemade vegan buttermilk with most types of plant milk. In spite of the fact that regular buttermilk is relatively low in fat, I find that the best vegan milk options are those that have a slightly richer texture.

I usually use plain/unsweetened soy milk to make my homemade vegan buttermilk. The rest of the time, I reach for oat milk.

With that said, I’ve had success with both almond and cashew milk, too. I recommend choosing an almond milk that’s a bit thicker (think: Califia Farms) rather than thinner in texture (for example, Almond Breeze).

The plant milks that I don’t recommend for making vegan buttermilk are flax (too thin) and hemp (too distinctively hemp-y in flavor).

What type of acid can I use in vegan buttermilk?

However, vinegar will also work well for the recipe. I regularly use either apple cider vinegar or white vinegar to make vegan buttermilk at home.

One of the nice things about this preparation is that you can use what you have in your fridge or pantry, whipping up vegan buttermilk for baking at a moment’s notice.

Because it takes only minutes to prepare vegan buttermilk, I usually only make as much as I need at one time.

If you bake very often, though, you might choose to make a few cups of vegan buttermilk at a time. You can use some immediately and store the rest.

Vegan buttermilk will keep for up to three days in an airtight container in the fridge. I usually store it in a glass mason jar.

As you whip up a cup of vegan buttermilk, you may wonder why, exactly, it helps vegan baked goods, pancakes, and waffles to rise.

The answer is that baking soda, which is a common chemical leavening agent in baking, is a base.

When baking soda is combined with an acid, including this vegan buttermilk, the acid neutralizes the base. That neutralization reaction creates carbon dioxide.

Tiny bubbles of the CO2 gas help baked goods to rise, puff up, and become the fluffy delights that we love to eat.

It’s worth noting that baking soda is one of two common chemical leavening agents in baking. The other is baking powder.

Baking powder, unlike baking soda, already has a weak, powdered acid added to it. This is commonly a combination of monocalcium phosphate and either sodium acid pyrophosphate or sodium aluminum sulfate.

Because baking powder has some acid in it already, it can create lightness and rise in baked goods without the need for adding an acid (like lemon juice or vinegar) to batter.

In all of my baking experiments, I’ve found that I have the best results when I use a combination of baking soda and baking powder. I usually use a 1:2 ratio of soda to powder.

And I nearly always bake with my vegan buttermilk in order to activate the baking soda in the recipe and enhance the rise that my two leavening agents create.

By the way, I often find myself telling people that it’s not necessary to replace eggs in many vegan baked goods.

It’s true that using a flax egg or aquafaba can be advantageous in certain recipes. But I’ve had great luck in preparing quick breads without any egg replacer.

I think that part of my success in bypassing egg replacer is the ability to create lightness—often aided with the use of egg in conventional baking—with the right combination of leavening agents and acid.

How to use vegan buttermilk

Unlike regular buttermilk, I wouldn’t recommend drinking vegan buttermilk on its own.

I do, however, recommend it for any and all of your quick bread needs. Here’s a sampling of recipes that will get a beautiful lift from it:

My baking archives will supply you with plenty more ideas—and of course, I hope that you’ll find many creative, personal uses for this handy household staple. 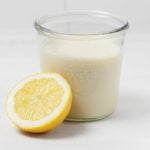 It’s no secret that baking is one of my big joys. More and more, I make jokes about quitting all of the various things that I do so that I can open a vegan bakery.

I doubt that’s in the cards, at least not anytime soon. But I can continue to create a steady rotation of sweet, fragrant, light and fluffy quick breads and treats here in my home.

I hope that this easy vegan buttermilk will help you to do the same.